Liverpool cruised past rivals Manchester United in a dominating fashion with a 3-1 victory at Anfield. Goals from Sadio Mane and two from Xherdan Shaqiri secured another 3 points for the reds thus regaining top spot in the premier league.

ALISSON (6) – It has to be said, Alisson made the bad mistake that led to Jesse Lingard’s goal which is why a low rating had to be given. He did however look assured for the rest of the game, even though he wasn’t tested all that much. Even the best make mistakes. Move on.

NATHANIEL CLYNE (7.5) – Without starting a premier league game in a long time, Clyne looked very assured at right back. Without contributing too much in attack, he put in a solid shift defensively, pocketing pacey Marcus Rashford in particular. From a fan perspective, it really is great to see him back out there and he will certainly be a useful asset in bolstering the squad.

DEJAN LOVREN (7) – Lovren is in great form and there is no doubt about that. Another good performance in the absence of Joe Gomez and Joel Matip showed that Liverpool’s strength in depth is getting much stronger. The big Croatian could have made the score 2-0 with his shot sailing over the crossbar from close range and could possibly have made more of an effort to deal with Lukaku when providing the assist for United’s goal but all in all, a great performance.

VIRGIL VAN DIJK (7.5) – I just don’t think I have seen a classier defender than Virgil Van Dijk. Brushing aside 40 stone Romelu Lukaku with ease throughout the match, Virgil kept the Liverpool backline in order and allowing next to nothing get past him. Once again, some lovely forward passes and runs set the tempo very high and attacking from the off.  VVD with the captain’s armband on just looks right.

ANDY ROBERTSON (8) – Did Mourinho really think that putting young Diogo Dalot up against the pace of Robbo was a good idea? Andy completely and utterly bossed the left side of the pitch throughout the match, linking up superbly with Sadio Mane once more. Not only was he fantastic in attack but defensively solid as well as he saved an almost certain goal by jumping up high to flick the cross away from the lurking Lukaku. The only criticism was that his corners failed to beat the first man on several occasions. Fantastic otherwise.

FABINHO (9-MOTM) – An absolute masterclass in midfield made it very easy to rate the Brazilian highly whilst being awarded man of the match. Winning the ball back on numerous occasions was one of his many assets whilst completely outplaying Namanja Matic in particular. His perfect dinked ball over the backline of United to Sadio Mane meant that he was able to claim an inch perfect assist and really solidify his starting place in the midfield of Liverpool. It’s fair to say that their defence didn’t look particularly United during that passage of play. 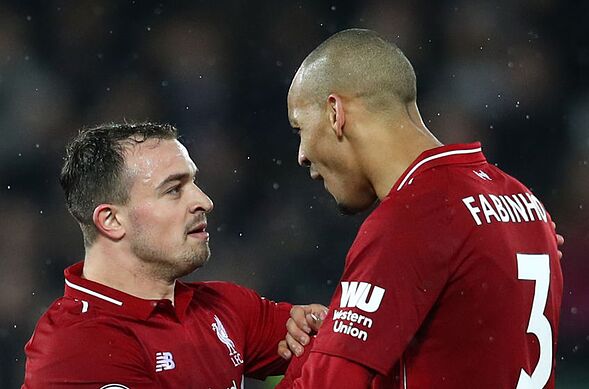 NABY KEITA (6.5) – Whilst not putting on a bad show, Naby found it tricky to produce a cutting edge pass to split open the United defence. Driving forward with the ball and pushing the team up the field was most certainly one of his strongest attributes. Keita did seem rather tired during the start of the second half and was subsequently substituted as a result of this for Shaqiri.

GEORGINIO WIJNALDUM (8.5) – This was without a doubt Wijaldum’s best game to date for the reds. He was able to be part of the midfield that completely shut down any attacks from the opposition and did the dirty work astonishingly. Wijnaldum was calm yet strong on the ball as he played in a deeper role that usual perhaps. He was so effective and it is very clear to see why Jurgen is using him week in week out.

MOHAMED SALAH (7) – Following on from his hattrick against Bournemouth and his winner versus Napoli, it is more than acceptable for Mo to have had a quieter game. All in all, Salah found it tricky to work his magic during the game and was, in all fairness, dealt with well by the Manchester United defence. Without ever lowering his effort levels, he worked extremely hard in trying to create chances but unfortunately struggled to find a clinical final ball.

SADIO MANE (8.5) – Scoring the game’s opening goal with a lovely bit of control and volley through the legs of David De Gea, Sadio was a nightmare for United to deal with over the course of the match. Mane also played a key role in Shaqiri’s first goal by sending Ander Herrera to the shops with a sublime bit of skill before playing the ball across goal to the oncoming Xherdan Shaqiri. 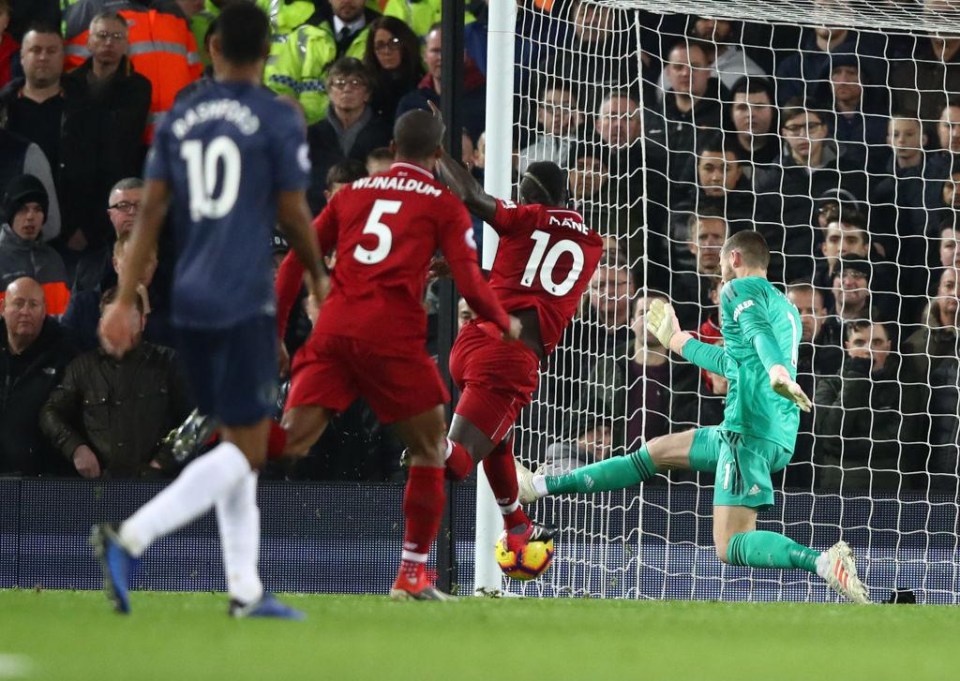 ROBERTO FIRMINO (8) – Roberto Firmino is Liverpool’s most quietly influential attackers by a county mile. Tirelessly sprinting back to win the ball back is something that has been part of Bobby’s game from the very first minute in a Liverpool top. Holding the ball up is Roberto’s strongest attribute and once more it was on show for all in Anfield to see. The perfect modern day Striker is our Bobby.

XHERDAN SHAQIRI (8) – The game changer. A delightful substitution from Jurgen Klopp meant that Liverpool were able to take all 3 points rather than settle for 1. His first goal came from his weaker right foot, catching a substantial deflection before hitting off the underside of the crossbar and into the roof of the net. The second came from a more usual scenario, his left foot, as he curled one into the left hand side of the goal past a deflated David De Gea. Hero status acquired. As we speak, Liverpool have just drawn Shaqiri’s former team, Bayern Munich, in the next round of the champions league. Oh how we would love to see him smash one home against them.

JORDAN HENDERSON (6) – With only around 10 minutes left to play, Hendo was brought on with the aim of solidifying the victory. A few passes were really the only highlights of the match for Jordan and to be fair, he wasn’t exactly given much time.