Two of the Premier Leagues heavyweights go face to face for the second leg of the Champions League quarter final as Liverpool take on Manchester City at the Eithad.

After a super impressive 3-0 win at Anfield, Liverpool will hope to confirm there place in the Champions League Semi-Final on Tuesday night.

Jurgen Klopp will be hoping for a similar performance on Tuesday of that what had happened at Anfield 6 days Prior. The reds did however have to turn there focus of Manchester City as there was another huge match in stall for them. The Merseyside Derby.

With a lot of key players missing from the starting 11, it was never going to be the free flowing attacking Liverpool we are used to seeing but quite satisfyingly, there was a team of 11 battlers on the pitch who conceded very few chances which will be vital going into Tuesday. Surprisingly, there wasn’t a yellow card in the Merseyside Derby, only the 2nd time it’s ever happened since the premier league began, ideal if your Jurgen Klopp as it stopped the risk of any injuries going into the massive game. Speaking of injuries , Jurgen Klopp said “ the good news is that there is no fresh injuries , ( on salah ) he can be available for Tuesday .’ Although the Derby finished 0-0 there is still lots of positives to take from it .

In terms of Europe Liverpool have been in fine form with 4 clean sheets in a row and becoming the top scorers in champions league history with 31 goals .

The reds will be going into the game full of cofidence with there defensive record in Europe and knowing that one single goal could knock Man City out.

Pep’s men could have had the title wrapped up on Saturday afternoon against local rivals Man Utd , at 2-0 up it looked comfortable for city and Pep could have planned to make more changes ahead of the champions league clash . But in the second half United did the unexpected and ruin city’s party and win 3-2. The result must have hurt city and the team moral , which can only benefit to Liverpool’s favour.

In terms of Europe , citys’s last 5 European fixtures have ended in

2 wins in there last 5 in Europe with 3 defeats isn’t the best return for a team in the favourites to win the competition. However, in the whole city have won 6 of there 9 in the champions league. Solid. They go into the match having to score at least 3 goals but if they concede a single goal, they need five. Hard.

This is the first times the clubs have met in Europe therefore Liverpool lead with 1 win to City’s none. However both clubs have met in England 206 times with Liverpool winning 103 times , city winning 52 times and then there has been 54 draws. Stats show Liverpool have dominated City in the past fixtures of both clubs. However this is a new city side and the most recent visit to the Eithad ended in a 5-0 win to City which would be enough to see them through this tie . However, a Mane red card didn’t help the reds on that day. The first European tie at the Eithad between both sides is defiantly going to be a good one.

Man City’s star player this season in all competitions has got to be POTS contender , Kevin De Bruyne. 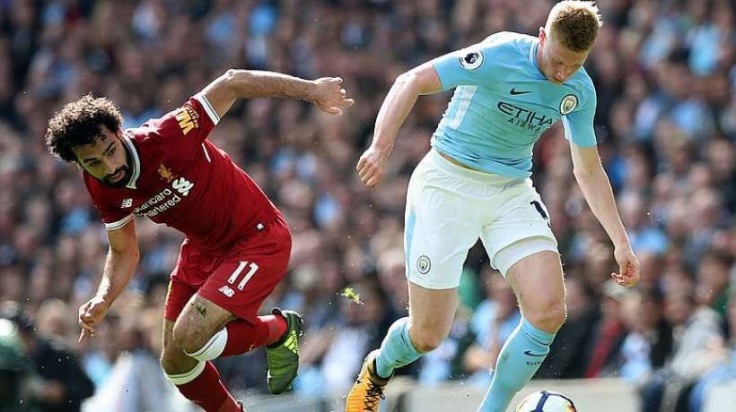 The Belgium has stacked 11 goals in 47 appreances with 20 assists as well. The Belgium alongside David Silva makes City tick and gets there 2 touches passes going into full flow . He has a unique touch as well as unreal eye for a pass which is going to be very hard for Liverpool to contain. However , luckily for Liverpool the Belgium international hasn’t been affective in the last 2 matches at Anfield but traditionally the big players step up at the big stages and the stage is set for Kevin De Bruyne.

Liverpol have a lot of injury’s going into this fixture.

Injuryed : Lallana , Gomez , Can , Matip and possibly Moreno. Also , captain Jordan Henderson is suspended for this tie which leaves Klopp with an unrecognised CDM however Wijnaldum played there against Everton and got Man of the match

Positive news in terms of injuries for Klopp though is that Klavan got his first 90 minutes for Liverpool since he scored the winner in a 2-1 win over Burnley in December. Also, Mo Salah is expected to be fit for the game , another boost for Jurgen Klopp. However , possibly most importantly is that Nathaniel Clyne played his first game for Liverpool this season against Everton after recovering from a bad back which kept him out for 8 months. Man City are basically a full squad going into the game against Liverpool with Aguero back after getting 20 minutes against Utd. Benjamin Mendy won’t be involved against Liverpol, however the Left back has been back in training for around 6 weeks , but the fixtures will come to soon for the French international.

The reds go into the second leg with a 3-0 lead and hope to secure there place to the champions league semi final on Tuesday.

The game will be on Bt sport with coverage starting at 7PM.

Lets hope we can get through 👍.