Well, the statement posted on Liverpool’s website was a pretty huge story. I can’t recall any club doing that in the past. Obvious to say, but it appears the stories about Van Dijk indicating his preference to Liverpool really rubbed Southampton up the wrong way. Southampton probably felt they were being mugged off a bit when, in truth, they hold quite a strong position at the negotiating table when it comes to Van Dijk — in that every Premier League club has money nowadays, their chairman has said they could realistically turn down a £60 million bid for the player and the fact he’s one year into a six-year contract, which seemingly appears to contain no release clause. It’s a blow for Liverpool because most of their rivals are after a centre-back this summer and there aren’t enough top-quality options to go around. It’s a reason why Liverpool feel they can justify demanding £30m for Mamadou Sakho this summer. 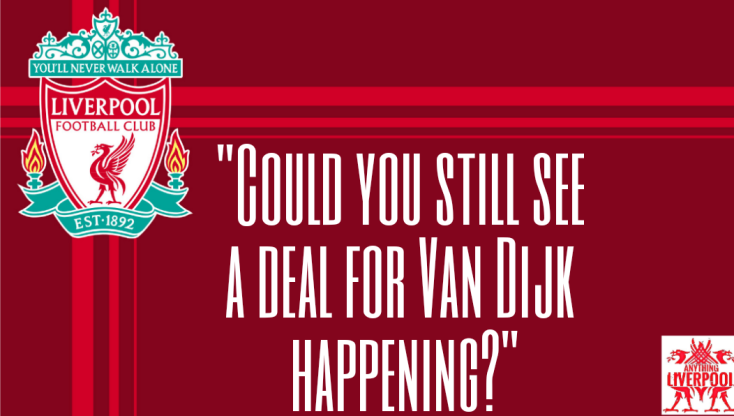 It’s worth remembering that the transfer window isn’t even open yet and there is a long way to go, plus you’d never rule out anything happening in football. But I must admit, I was quite surprised to see in the infamous statement Liverpool say they have ended their interest in the player. It’s quite the claim. Liverpool were extremely keen on Van Dijk, so they might be hoping to pull a deal out of the bag towards the end of the transfer window with help from the player himself.

I think so, yeah. But as was the case last summer, I don’t think those departing will take anybody by surprise. I know there’s been chatter about Philippe Coutinho drawing interest from Barcelona, but that move appears to be unlikely at the moment. I’d say it’s just as important to keep your best players than it is to make marquee signings. Putting a stop to world-class talent leaving Anfield, which has been the case under Klopp, is a step in the right direction.

I think it’s safe to say Liverpool will look to move on Sakho, Alberto Moreno, Kevin Stewart and probably a few others on the fringes. The difficult ones to call are Daniel Sturridge and Lucas Leiva. Lucas is held in high esteem by the club and Klopp, so it might be a case of letting him decide what he wants to do, as was the case when Inter Milan came calling in January. While Sturridge’s injury record has improved under Klopp’s careful management, the fact remains that he’s still unreliable throughout the entire season. There’s no doubting his talent and the performances towards the end of the season proved he’s still got ‘it’ after a lot of people wrote him off. But if a good offer comes in for him then Liverpool will certainly take it under consideration. When speaking to the media, Klopp hasn’t exactly been quick to stress just how much he’d like Sturridge to stay next season.

I know, I know. This one is extremely, extremely unlikely given the cost and other clubs interested. But Klopp has been talking about how players are attracted to the “project” at Liverpool and Mbappe’s signature would go a long way to backing up that claim. Van Dijk was prepared to turn down advances from Man City and Chelsea in favour of Liverpool.

Liverpool like him, as do Bayern Munich and others. He wants to play lots in order to not stunt his development. While he may not make the starting XI for every game, Liverpool should be able to offer him plenty of opportunities with European football hopefully on its way.
3. Mohamed Salah
He’s got the pace and numbers — in terms of goals and assists — to justify paying a wee bit over the odds in this inflated market.

4. Aymeric Laporte
Liverpool need a centre-half and Laporte is a good one. Chelsea and Man City are sniffing around him. Liverpool should be in the conversation, too.

5. Kieran Tierney
It’s hard to speculate who Liverpool are targeting at left-back. As far I know, they moved on from Fulham’s Ryan Sessegnon some time ago and began looking for alternatives. I’m not aware of any interest from Liverpool in Tierney, but he certainly fits the profile of players they’ve been looking at to serve under James Milner

The fact that this is my dream job. 10-year-old Glenn would think 22-year-old Glenn is the coolest person in the world. It’s ace. I used to work as a journalist for Liverpoolfc.com, so the ability to walk around Melwood and talk to Klopp and the players was real pinch-yourself stuff. The most enjoyable aspect of the job is doing an interview or sourcing a story that will make the reader learn something new. It’s very satisfying. It’s a good gig and I’m very lucky to do what I do. The hours are unpredictable and it’s stressful at times, but it’s very rewarding!

As a reporter they’re good because you will almost certainly walk away with two or three news lines from one, so you’re never short for a story. For the most part, he’s in a good mood and tends to be a bit jokey with the journalists who cover Liverpool day in, day out.

Certainly. It’s where Liverpool, ultimately, belong and Anfield can still bring back those unbelievable atmospheres when everyone is in the mood. However, Liverpool need to act that they belong in the competition. When Real Madrid came to Anfield in 2014, it seemed the players and supporters were in awe of a team full of superstars. That needs to change if Liverpool are to make waves in the competition again. I’m sure it will be different this time around. I, for one, can’t wait to go on my first ever European away trip!

It’s a possibility. I’m always quick to stress that journalists are always playing catch-up. Football clubs work extremely hard to keep transfer dealings under wraps. How news emerges in the public domain is as a result of journalists being good at their jobs and having invaluable contacts. The Sadio Mane deal last summer was done pretty quickly, and I can remember my panic when the news of Liverpool’s interest in Gini Wijnaldum broke. The bid for Christian Pulisic seemingly came out of nowhere, too. So Liverpool have proved in the past that they can pull a deal out of the bag.

It’s all quiet on that front at the moment. The case with Salah appears to be one of brinkmanship, with it looking like Liverpool are the only club bidding for Salah’s signature. It’s also worth remembering that the season has only just finished for some players after international fixtures. Some may have gone away for a break and will deal with their future when they return. That’s not to say football clubs aren’t still having conversations with intermediates and associates, but things may gather pace when players are back from holidays etc.

That’s it from Glenn Price. Anything Liverpool would like to say thank you for taking the time and hopefully we will chat again at the end of the season!

Anything Liverpool all started back when before a Liverpool game I decided that instead of me looking at other Liverpool accounts and engaging with there posts, i wanted to share my knowledge on my beloved Liverpool and post updates, news and gossip for others to see. I wanted to create a space for people to discuss there views (regardless of how irrelevant they are) and open up discussions at the same time.