Why Liverpool Must Keep Hold Of Emre Can

With just a year remaining on his contract and no real sign of progression in contract talks, Liverpool must tie Emre Can to a new deal, now.

The powerful German midfielder has been a key asset to the Reds’ midfield this season and it’s imperative they don’t lose him.

At just 23, he still has bags of potential, despite already showing his array of qualities. To sell him would be a catastrophic error considering the fact that he is likely to only improve as time advances.

Can has scored five league goals this campaign just gone, with his goal against Watford winning the goal of the season award, in what was a sublime piece of skill. 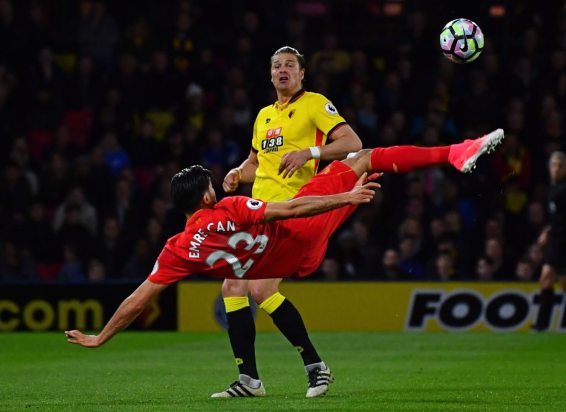 After being subject to mass criticism in the first few months of the season, Can proved the doubters wrong and was instrumental for the side in the latter stages.

Since his arrival from Bayer Leverkusen in 2014, the German international has morphed into a key figure at Anfield. Losing him would result in a lack of solidity in the midfield- with other Liverpool midfielders not possessing the same stature and physique that Can bolsters.

The dynamism and energy of Can makes him unique. Coutinho, Firmino, and Lallana all possess an abundance of flair, which enables them to dazzle opponents and weave their magic. Whereas, Can holds something incomparable. He is able to drive at defences, but can also carry out the nitty- gritty defensive duties.

In a press conference last month, ahead of the Southampton game at Anfield, Klopp said the following :

“There’s no secret of how much I like Emre- and how much he likes the club too. It is two partners with big respect for each other.

“We are in talks with him, but there is no pressure for him.

“If we can keep good players that makes sense for good development and he is one of those good players.”

But, since this statement of intent to secure his services by Klopp, there has been no further news and it has been reported that Juventus are keeping tabs on Can.

As his contract runs down, the likelihood of him departing surges upwards. The Reds must seriously weigh up their options and negotiate a deal, or otherwise face losing him.