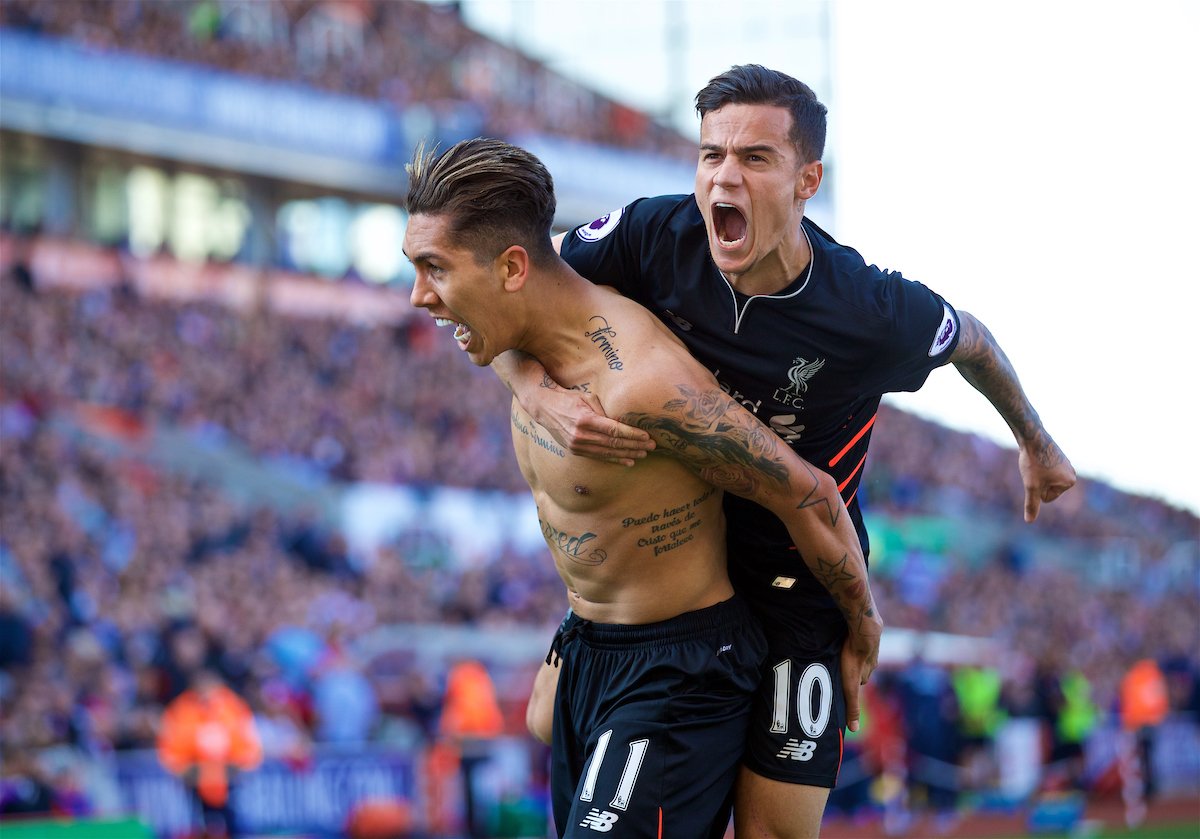 Mission Impossible… Became possible. A fairly dull first half put Stoke ahead of Liverpool. An unmarked Jon Walters placed a cushioned header into the back of the net, his second in this season against Liverpool. Jürgen Klopp also dropped the Brazilian duo Roberto Firmino and Philippe Coutinho (illness). Due to those changes, Klopp placed the youngsters Ben Woodburn and Trent Alexander Arnold. Liverpool who played a back 3 in today’s game was appauling, no proper defending and nobody marked Walters. Klopp made two changes at half time, and bought on Coutinho, and Firmino for the youngsters. Stoke city started off the second half and were brilliant, but the Brazilian duo changed the game with both striking twice in under 3 minutes. Klopp also placed Daniel Sturridge into the team in the second half after a dismal performance from the young Belgian Divock Origi. Firmino’s magnificent volley over the keeper was all that won it for the Reds.

A great performance for the Belgian, and many key saves that kept us in the game. Does he deserve to keep his place for next year?

Made a huge mistake in the first half and almost gave Stoke the lead after trying to clear it. He also didn’t mark Jon Walters when he scored, he just stood gazing at Walters. Still not a good performance after the Everton game.

Didn’t to much in the game, but at least he didn’t give the ball away.

Another bad performance? Yes indeed, a dismal performance from the Estonian international, although he did have the most accurate passes in the team… What a huge surprise!

Got some game time which was good, and is improving drastically.

Not his best performance, and not his best position. Takes too much time to look for his option, and slows our tempo when attacking.

Exceptional performance from Milner. Had a slow start in the game, and was a brilliant player today for the reds.

Another great performance, reliable, quick, strong all you need for a good wing back/ fullback.

A bad performance in the first half, but a much improved Gini in the second half. Pressed the hell out of Stoke, and must be tired for sure.

I don’t want to be so harsh, but he wasn’t good. Klopp risked it too much and he cannot let the top 4 get away from us. He’s improving, but Stoke is a tough task for him.

A completely different player from the last 2 games, and i clearly want Daniel Sturridge to start for the next game.

A positive performance from Bobby, and what about that volley? A sweet volley over Lee Grant, and gave us the 3 points to take back to Merseyside.

An eye opening performance and it’s now 3 in 3 for the Brazilian, and he’s now the top Brazilian goal scorer in the premier league.

Avergae Performance after coming back, and i can see him in the starting 11 for the next game after an unbelievably bad performance from Origi.