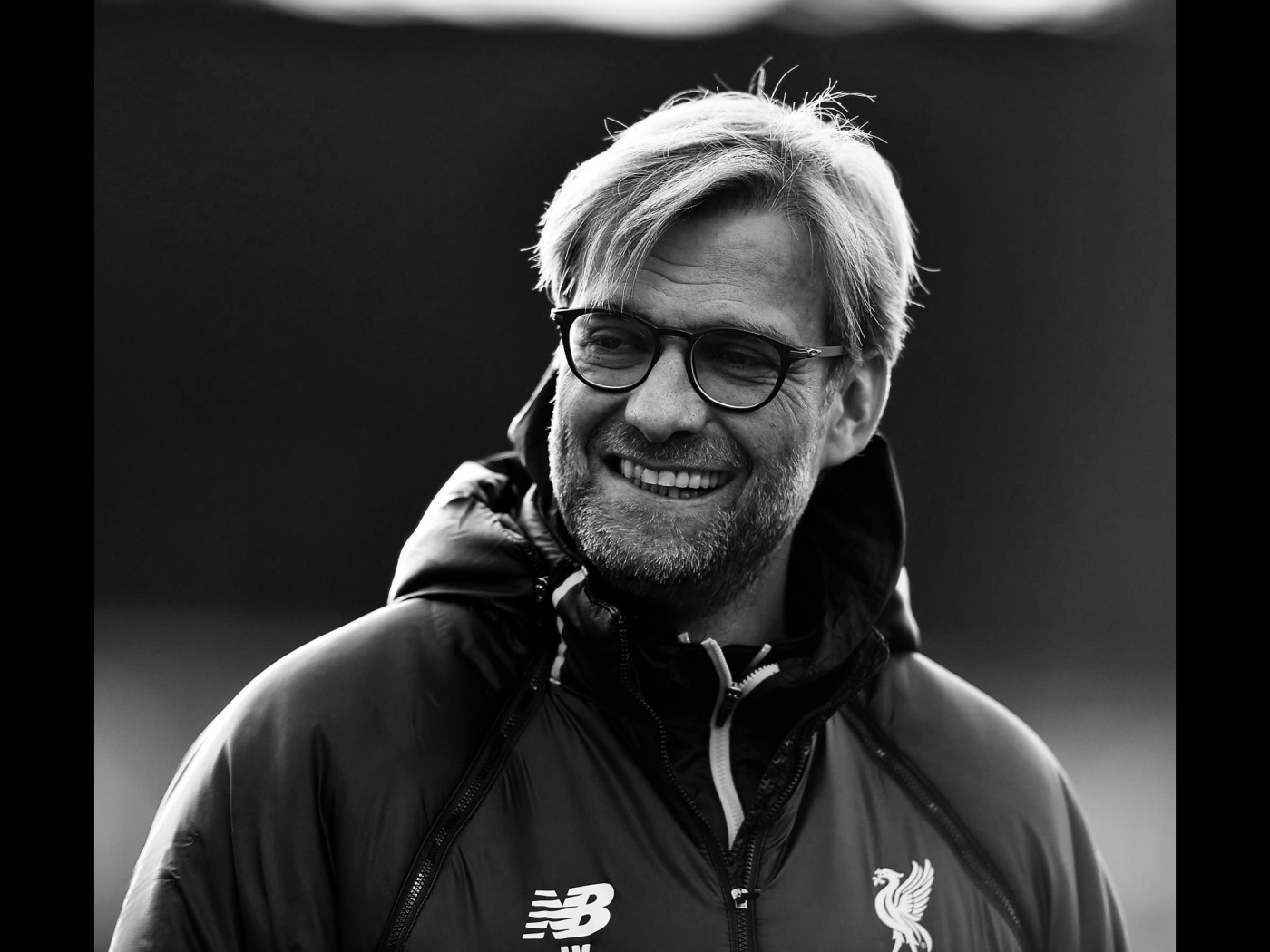 Is there any other manager on the planet you’d swap Jürgen Klopp for? I can honestly say no. Not because we’ve wanted a big name manager to direct us back to the success of old but because Jürgen’s implementing his rules and sticking to a model that combines passion, solidarity, tactics and intelligence. Okay nothing is guaranteed in football so to say this plan will 100% make us champions again would be foolish but I for one believe in this system and truly expect, if given the time, Klopp’s Liverpool to become title challengers once more. Not forgetting the pure fun factor and excitement that’s returned to Liverpool football club.

Here we’ll look through Klopp’s football philosophy (taken from his biography) how it’s working with our side and adapting our play:

Every player must have passion and fighting spirit: to give 100% every game (get stuck in). In terms of who suits this, well at this moment and can’t think of a single player that’s not giving his all for the club, first team, substitutes, reserves, under 23’s, tea ladies………..something Klopp himself doesn’t lack!

To differentiate between possession and opposition possession: first setting up securely before going on the offensive, to prevent openings and counters. Everyone knows the difference in jobs when in possession or out of possession. I liken the front six when out of possession will go hell for leather to retain the ball but as soon as in possession it’s simple fast one touch passing with positioning the main goal to become the free man.

Run hard and far to always have a free man ready to receive the ball in attack, thus never regaining the ball to end up with an empty attack. Open up with interchanging free flowing forwards, guaranteeing a free option to pass to. The perfect example of this is the Hull game. Constantly changing positions to allow themselves to be free to take the ball and be potent in possession.

To focus on group rather than individual player tactics. The whole team must defend as a team with discipline and also press high to put early pressure on the opposition. Firmino playing as false nine has stuck to this exceptionally well, he adds pressure right from the top giving the opposition defenders no time for slow passing or to pick out a pass. He perfectly presses/defends out of possession and with the flick of a switch is on the attack when the ball is retained.

To dominate play and possession instead of relying on counter attacks.

To ensure fast transitions in both directions with equal balance between defence and attack. Hence the purchase of one Joël Matip because he has that ability to be a ball playing center back, not only a great defender but adds that fast transition to midfield and onwards.

Play with vertical penetration: never look for sterile/square passes but always attacking or proactive play towards the opposition goal. Making us far more attack minded, every player has a part to play whether in attack or defensive. Looking at Henderson who’s in the past been criticised for square balls has completed 654 passes this season with a pass accuracy of 89%, of which 75% were forward passes. The difference. 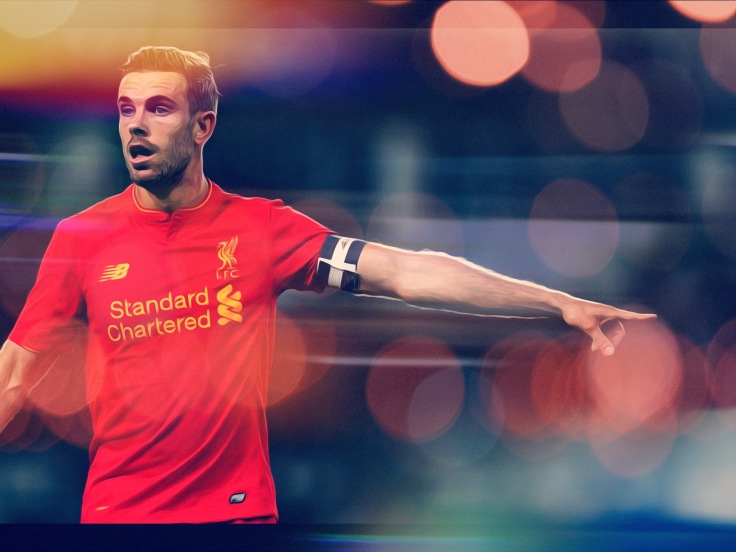 Employ quick and direct one touch combinations without unnecessarily holding on to the ball, to unsettle opposition defences and help provoke errors.

Replace injured/suspended players directly rather than change the system or play someone out of position.

Control the movement of groups of players towards the ball to occupy the relevant zone of play and preventing the opposition from playing their tactics.

Quickly win the ball through pressing and gegenpressing (pressing directly after losing possession in order to regain it).

To think fast and act fast: slower players tend to play backwards due to fear of one on one situations. Which is why it’s no surprise we’ve created more chances (134) than any other team in the Premier League. Klopp’s demanding fast attacking football with no time to dither on the ball.

To have incredible stamina physically and mentally. Full concentration and action is needed for the full ninety minutes.

Be technically proficient and to be able to receive and accurately pass the ball at pace.

If you compare the difference between last seasons first nine games under Brendan Rogers to this seasons it’s clear to see all of Klopp’s tactics working in progress: top 2015/16-bottom 2016/17. 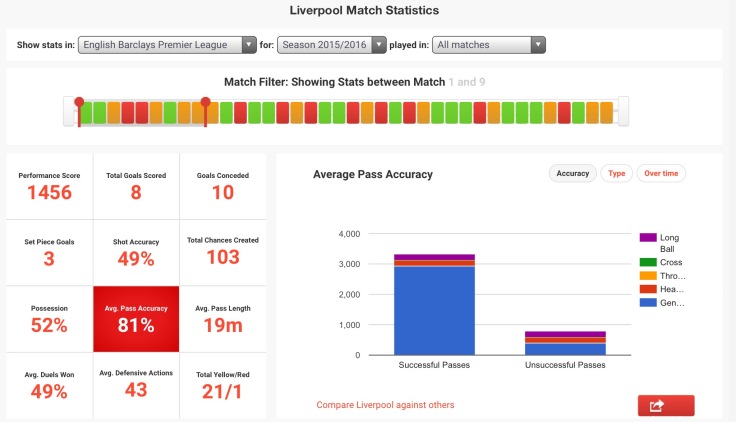 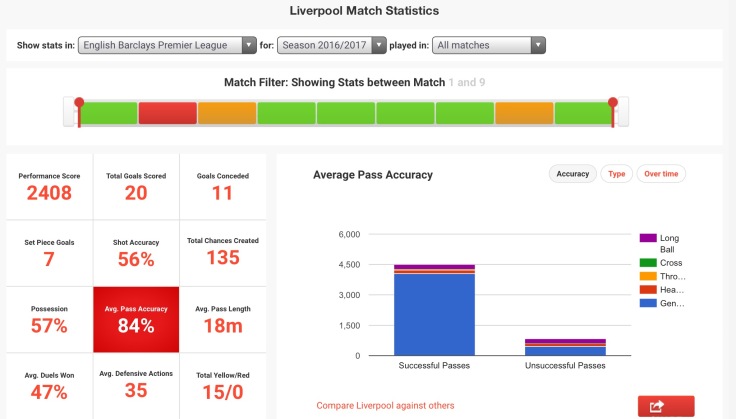 Show tactical discipline while maintaining attacking intent depending on flexibility. Players not obliged to stay in their position at all costs, as long as they have cover to fill the gap their leaving. Which can only be possible with mutual trust between players, this is why I think this has taken time and we’re only now seeing the benefits of each player understanding each other’s movements.

For full-backs and wing-backs to have equally significant roles in attacking as well as defensive. Since they have to cover the full length of the pitch and repeat intensive sprints, they must maintain tremendous fitness. Unlike central defenders, they have little chance of taking any breaks from play.

Under Klopp and this new philosophy there’s no area that’s not improved, when reading through these tactics you can really see the work that goes in behind the scenes and start to understand our new set up. If it’s Henderson the pass master, Firmino, Coutinho, Mané, hustling defences or the emergence of Lallana the “must start” heartbeat of the team all are products of Jürgen Klopp’s philosophy.

p.s if you’re not excited now, you probably never will be.