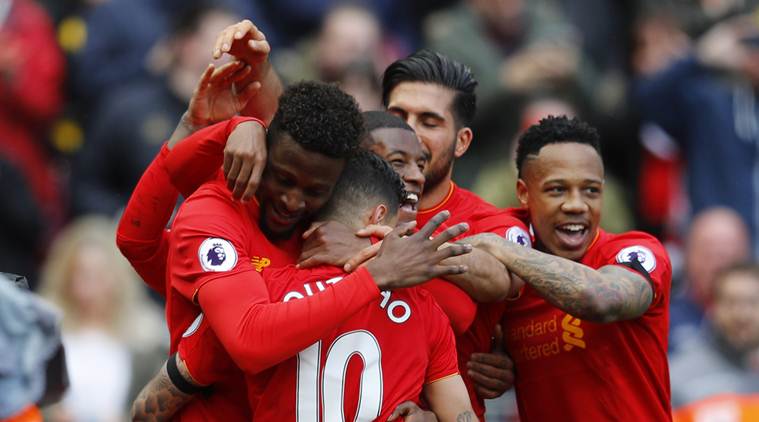 Liverpool won the Merseyside Derby comprehensively 3-1 on Saturday lunchtime – with subsets of supporters swift to lavish praise on individuals.

Emre Can was excellent, Sadio Mane was a threat as always – but I think three players in particular deserve credit for proving their detractors wrong on a straightforward afternoon at Anfield.

Before kick off, I noticed quite a few supporters (including myself) grimacing at the team selection – with Dejan Lovren’s inclusion ahead of in form Ragnar Klavan as well as the introduction of the maligned Lucas Leiva in midfield.

Another out of sorts performer, Philippe Coutinho, walked his way into the squad as has been the norm every week. But that’s not to say that he doesn’t deserve credit for an excellent performance either.

Jurgen Klopp did make some big calls – and they paid dividends. The hallmark of a world-class manager is to be willing to rotate your squad; his predecessor Rafael Benitez may have been guilty of over-rotating in the past, but the starting eleven showed he’s not afraid to make big calls.

So I do think that is an underlying positive to take from a fine performance and result.

The win means that top 4 is further in our hands – meaning it is ours to lose from here on in. With Man United having an unfavourable fixture list until the end of the season and Arsenal in bad form, we need to continue taking chances to pull further away from the rest of the pack.

I’m going to dissect each of the aforementioned players’ performance against Everton – do they deserve more starting berths perhaps in the absence of key midfielders? 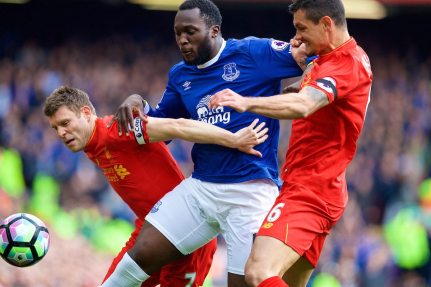 The Croat has never endeared himself with Liverpool fans – having been always renowned for his general defensive unreliability as well as his suspect positioning.

It did seem slightly puzzling to include him in a weakened back four already comprising of James Milner, Joel Matip and Nathaniel Clyne at first; especially if you consider the form Matip’s CB partner Ragnar Klavan was in of late.

The Estonian was generally solid and showed glimpses of his quality. I wasn’t convinced when Lovren got himself into the side – but he proved a lot of supporters wrong from the off.

From the off, he was winning plenty of aerial duels against star striker Romelu Lukaku – who is the top scorer in the Premier League and renowned for his physique. Many thought he’d have a very difficult afternoon – but he rose to the challenge.

He was also willing to get his foot and body stuck into challenges like a typical derby. We don’t normally associate the word ‘bravery’ with Lovren, but boy he proved us wrong here. At one point, he was on the receiving end of a disgusting challenge from Barkley – which should’ve seen the Englishman come away with further punishment.

Basically Lovren had the hallmarks of a world-class centre back. Barring one momentary lapse of concentration which resulted in Everton’s equaliser, he looked comfortable as ever in the defence. It’s a case of whether he can maintain his consistency. If so, Klavan faces a battle for partnering Matip as CB until May. 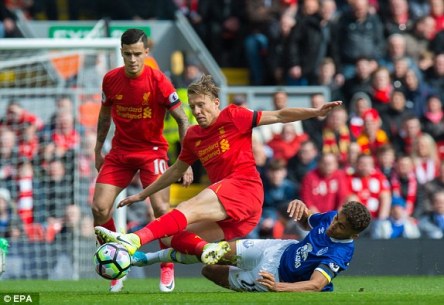 Lucas is somewhat of a cult hero to Liverpool. Having signed back in the summer of 2007 for Rafa Benitez’s side, many have acknowledged him as a club legend & a great servant. Unfortunately, that means nothing on the pitch in the modern day – results is what matters if you want to be in the chase for a spot in Europe’s elite.

I do feel that some of the criticism he got was merited, especially after some really poor displays where he hardly looked like a senior player. But let’s not forget Jurgen Klopp was playing him as a centre-back. His natural position is in centre midfield. That’s where his best performances came in a red shirt.

I feel playing him as a centre back was Klopp’s attempt to relieve the fact that we didn’t have a good enough centre-back to partner Joel Matip – and it spectacularly backfired during our poor January form. And lo, when he was moved to the centre of the park yesterday, he looked so much more at home.

I would’ve personally have preferred Grujic to return to the midfield after his lay-off or Coutinho to move slightly deeper – but Lucas proved us all wrong.

He just looked so commanding. He turned in a performance that Momo Sissoko would’ve been proud of. He also put his body in the way of tackles, wasn’t afraid to win aerial duels as well as generally anchoring our midfield in absence of Henderson.

Let’s not forget his assist either..

Here’s a map of Lucas’ passing around the pitch today. He was an absolute workhorse of a midfielder That’s the Leiva we’ve been after for a long time. 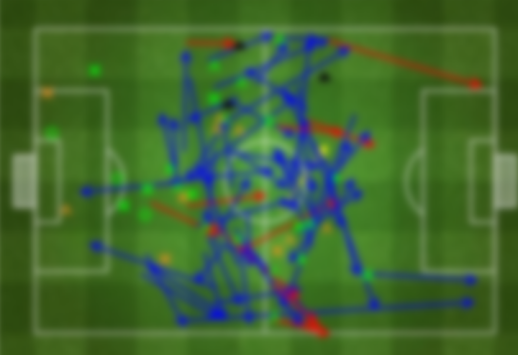 If Henderson does recover in double quick time, it’s going to be difficult to exclude Lucas from the side especially after the performance he had yesterday. 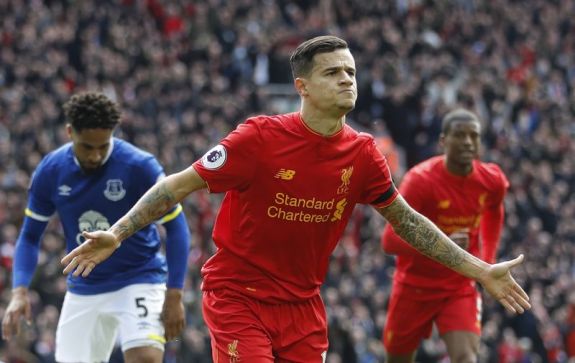 Coutinho – what else can I say? A lot of Liverpool supporters claim he is a world-class player. He can be one when he’s at the peak of his powers – but he is still far too inconsistent to be considered world class yet. However, he very much remains the Reds’ magician. Time and time again, we’ve relied on him to deliver.

That hasn’t been the case in the last few weeks. The Brazilian had been terribly out of sorts – at times very frustration to watch. The only magic we saw from him was his disappearing act at times. He was struggling to find his feet after his injury in November. But he upstaged this with a massive improvement from recent weeks; just when Klopp & the fans needed him to.

Wow. I just literally cannot epitomise his performance. This was the Coutinho that he had missed for weeks, and weeks and weeks. It wasn’t just his sublime goal which he arrowed like a rocket into the top right corner.

His footwork was sex. He had the full backs on toast everytime he ventured into the Everton half. Twinkle toes. Just thought I’d give you a reminder of when he sent Everton defenders back to Goodison..

His assist offered a diversity of composure too as well as accuracy. His passing accuracy at 86% was also impresssive.

In general, he just looked a threat all game. Everton defenders were shit scared of him when he got the ball.

Everyone performed excellently, but I don’t to waste my time writing this article to appraise everyone. There were others who have emerged from the dead.. 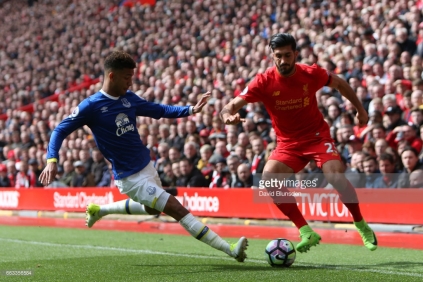 Can has been improving of late – he turned in a MOTM performance away at Man City, and was a contender here. He is nurturing into the midfielder we craved before Christmas. He made plenty of blocks throughout and wasn’t too bad going forward either! 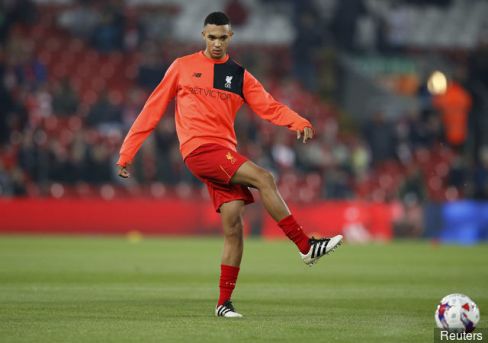 To be honest, TAA hasn’t had much of a starting berth of late barring him being called up for the away fixture to Man United when Nathaniel Clyne was ruled out. He was so composed that day – and showed very promising signs. He had a curling effort tipped away from Robles and also made some very intelligent runs. He already seems to have the aptitude of a future right-back. Promising signs.

Written by @SteLindellLFC. Stats courtesy of Squawka and Liverpool Echo